But he [Jesus] answered and said unto them, An evil and adulterous generation seeketh after a sign; and there shall no sign be given to it, but the sign of the prophet Jonas. - Matthew 12:39


Why did 120,000 people in Nineveh repent of their sins and turn to Yahweh for deliverance? Was Jonah an especially anointed preacher? Was it his words alone that brought about spiritual revival or was there a visible sign of coming destruction in the sky?

Astronomer Gill Broussard believes that the 'Sign of Jonah' that Jesus spoke about was actually a 'heads up' sign in the sky - a near earth object (NEO) that is seven times the size of earth and that orbits our sun. Mr. Broussard believes that its approach was possibly accompanied by drought, weather changes and earthquakes or tremors (like we are seeing today.) This would have set the stage for Jonah's audible preaching of God's judgment and the moving of the Spirit of God in the hearts of the Ninevites.

Mr. Broussard calls this NEO 'Planet 7X'. Other people have called it Nibiru, the Fiery Dragon of Old, the Guest Star, Planet X (the tenth planet of our solar system) and Gabriel's Fist. Does the Bible tell of this NEO - both in the past and the future? Is so, it could be coming our way soon! And we need to prepare! YOU DECIDE! Signs and Wonders in the Heavens

Throughout history, God has judged nations that have not believed in Him and have rebelled against Him. He typically warns nations in advance by giving signs in the heavens - so they can turn to Him, repent of their sins and be delivered from the coming destruction.


And I will show wonders in the heavens and in the earth, blood, and fire, and pillars of smoke. The sun shall be turned into darkness, and the moon into blood, before the great and the terrible day of the LORD come. And it shall come to pass, that whosoever shall call on the name of the LORD shall be delivered. - Joel 2:30,31


Then Jesus said unto him, Except ye see signs and wonders, ye will not believe. - John 4:48

Around the year 687 BC, Nineveh was the most powerful nation in the world, but they were wicked and violent. God was angry at the people of Nineveh because of their wickedness, yet He loved them, so he sent Jonah to warn them of coming destruction.


And the word of the Lord came unto Jonah the second time, saying, Arise, go unto Nineveh, that great city, and preach unto it the preaching that I bid thee. So Jonah arose, and went unto Nineveh, according to the word of the Lord. Now Nineveh was an exceeding great city of three days' journey. And Jonah began to enter into the city a day's journey, and he cried, and said, Yet forty days, and Nineveh shall be overthrown. - Jonah 1:1-4

So the people of Nineveh believed God, and proclaimed a fast, and put on sackcloth, from the greatest of them even to the least of them. For word came unto the king of Nineveh, and he arose from his throne, and he laid his robe from him, and covered him with sackcloth, and sat in ashes. And he caused it to be proclaimed and published through Nineveh by the decree of the king and his nobles, saying, Let neither man nor beast, herd nor flock, taste any thing: let them not feed, nor drink water: But let man and beast be covered with sackcloth, and cry mightily unto God: yea, let them turn every one from his evil way, and from the violence that is in their hands. Who can tell if God will turn and repent, and turn away from his fierce anger, that we perish not? - Jonah 3:5-9

And God saw their works, that they turned from their evil way; and God repented of the evil, that he had said that he would do unto them; and he did it not. Then said the Lord, ... should not I spare Nineveh, that great city, wherein are more than sixscore thousand persons that cannot discern between their right hand and their left hand; and also much cattle?" - Jonah 3:10, 4:10,11

Then certain of the scribes and of the Pharisees answered, saying, Master, we would see a sign from thee. But he answered and said unto them, An evil and adulterous generation seeketh after a sign; and there shall no sign be given to it, but the sign of the prophet Jonas: For as Jonas was three days and three nights in the whale's belly; so shall the Son of man be three days and three nights in the heart of the earth. The men of Nineveh shall rise in judgment with this generation, and shall condemn it: because they repented at the preaching of Jonas; and, behold, a greater than Jonas is here. - Matthew 12:38-41 (See also Luke 11:29,30,32.)


The Pharisees also with the Sadducees came, and tempting desired him that he would shew them a sign from heaven. He answered and said unto them, When it is evening, ye say, It will be fair weather: for the sky is red. And in the morning, It will be foul weather to day: for the sky is red and lowering. O ye hypocrites, ye can discern the face of the sky; but can ye not discern the signs of the times? A wicked and adulterous generation seeketh after a sign; and there shall no sign be given unto it, but the sign of the prophet Jonas. And he left them, and departed. - Matthew 16:1-4 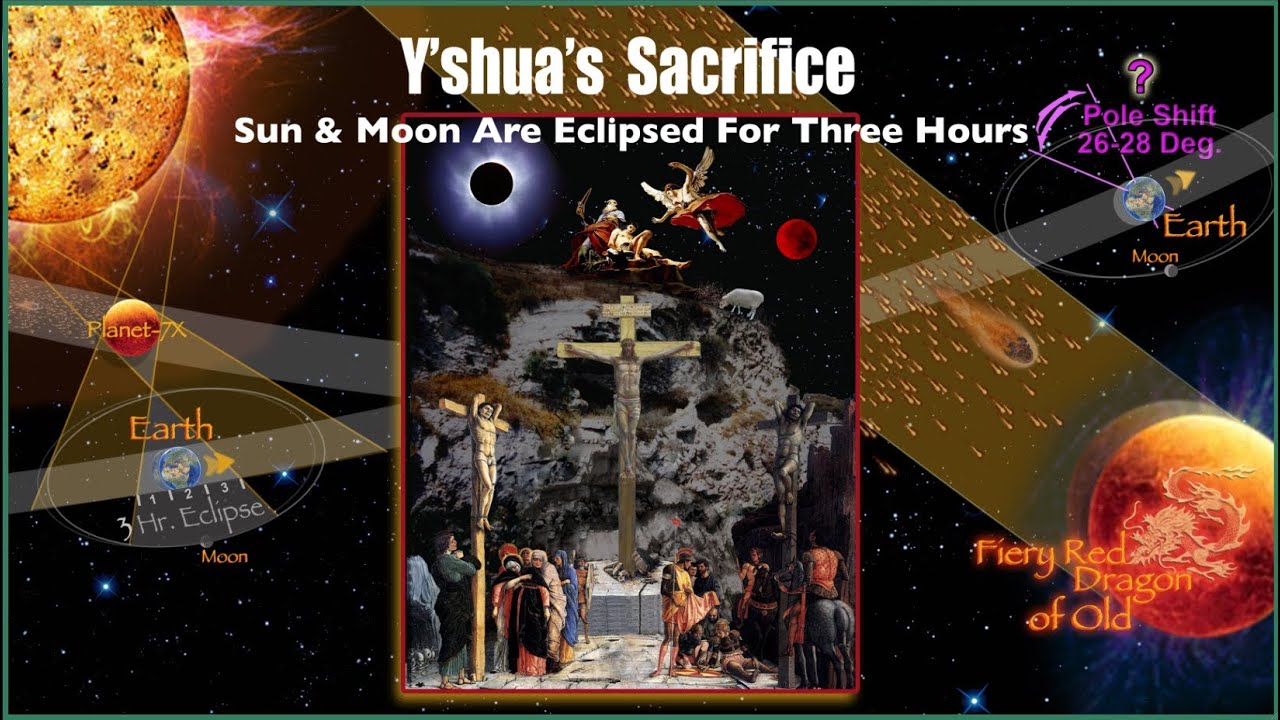 When Jesus was crucified, there was darkness over the land from around 12:00 noon until 3pm. Gill Broussard believes that this was a three hour solar eclipse caused by a Planet X flyby. He points out that it could not have been a normal solar eclipse, which only lasts for around 7 minutes. Note that signs in the heavens were also in the mind of Peter when he preached on Pentecost. Why else would he mention them?


And I will shew wonders in heaven above, and signs in the earth beneath; blood, and fire, and vapour of smoke: The sun shall be turned into darkness, and the moon into blood, before the great and notable day of the Lord come: And it shall come to pass, that whosoever shall call on the name of the Lord shall be saved. Ye men of Israel, hear these words; Jesus of Nazareth, a man approved of God among you by miracles and wonders and signs, which God did by him in the midst of you, as ye yourselves also know: Him, being delivered by the determinate counsel and foreknowledge of God, ye have taken, and by wicked hands have crucified and slain: Whom God hath raised up, having loosed the pains of death: because it was not possible that he should be holden of it. - Acts 2:19-24

Mr. Broussard believes that Planet X comes by every few hundred years, so he calls it Planet 7X. He links the flybys to certain historic events:

Another Planet X Flyby Prior to the Return of Jesus?

And there shall be signs in the sun, and in the moon, and in the stars; and upon the earth distress of nations, with perplexity; the sea and the waves roaring; Men's hearts failing them for fear, and for looking after those things which are coming on the earth: for the powers of heaven shall be shaken. And then shall they see the Son of man coming in a cloud with power and great glory. - Luke 21:25-27 (See also Matthew 24:29,30 and Mark 13:24-26.)


And I beheld when he had opened the sixth seal, and, lo, there was a great earthquake; and the sun became black as sackcloth of hair, and the moon became as blood; And the stars of heaven fell unto the earth, even as a fig tree casteth her untimely figs, when she is shaken of a mighty wind. And the heaven departed as a scroll when it is rolled together; and every mountain and island were moved out of their places. And the kings of the earth, and the great men, and the rich men, and the chief captains, and the mighty men, and every bondman, and every free man, hid themselves in the dens and in the rocks of the mountains; And said to the mountains and rocks, Fall on us, and hide us from the face of him that sitteth on the throne, and from the wrath of the Lamb: For the great day of his wrath is come; and who shall be able to stand? - Revelation 6:12-17


The Importance of Living by Faith for Now

Regardless of whether Gill Broussard is correct in linking these three events to Planet X / Nibiru, we should all heed the words of Jesus and His apostles.


Jesus saith unto him, Thomas, because thou hast seen me, thou hast believed: blessed are they that have not seen, and yet have believed. - John 20:29


Knowing this first, that there shall come in the last days scoffers, walking after their own lusts, And saying, Where is the promise of his coming? for since the fathers fell asleep, all things continue as they were from the beginning of the creation. For this they willingly are ignorant of, that by the word of God the heavens were of old, and the earth standing out of the water and in the water: Whereby the world that then was, being overflowed with water, perished: But the heavens and the earth, which are now, by the same word are kept in store, reserved unto fire against the day of judgment and perdition of ungodly men. But, beloved, be not ignorant of this one thing, that one day is with the Lord as a thousand years, and a thousand years as one day. The Lord is not slack concerning his promise, as some men count slackness; but is longsuffering to us-ward, not willing that any should perish, but that all should come to repentance. But the day of the Lord will come as a thief in the night; in the which the heavens shall pass away with a great noise, and the elements shall melt with fervent heat, the earth also and the works that are therein shall be burned up. Seeing then that all these things shall be dissolved, what manner of persons ought ye to be in all holy conversation and godliness, Looking for and hasting unto the coming of the day of God, wherein the heavens being on fire shall be dissolved, and the elements shall melt with fervent heat? - 2 Peter 3:3-12

This page was last updated in October 2015.